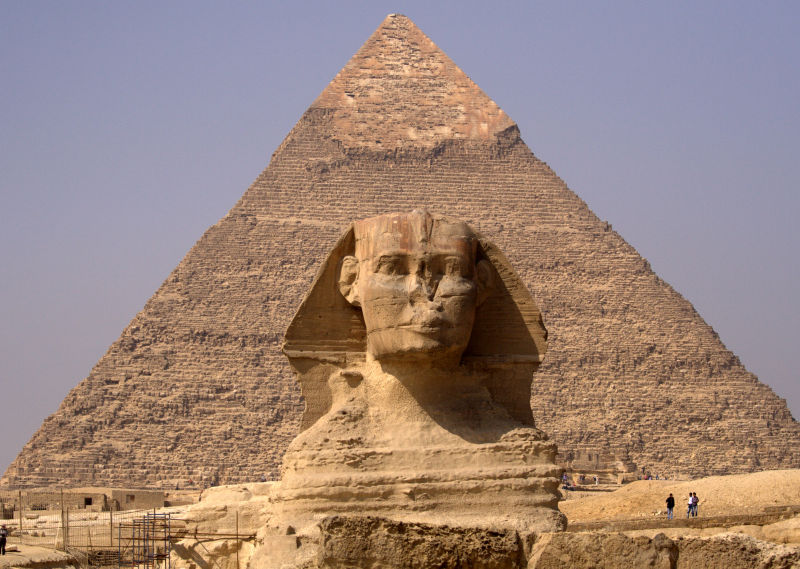 Posted by Ryan (Vancouver, Canada) on 2 March 2010 in Architecture.

Today was our trip that must be taken - the Pyramids of Giza, the Sphinx, and a couple of other older, 'practice' pyramids, you might say. We started in the morning at the Pyramids, watching the sun clear off the haze (blech) and taking in the details - at the top of one, the smooth covering stone that used to house all of the pyramids remained (seen in this picture), giving the idea that everyone is used to when they think about pyramids. Otherwise? They were rough - understandable, it's stacked stone. Quite impressive. We didn't go in these ones, as there isn't much inside and it costs twice as much again to go inside as it does just to look at them. (Today we definitely felt why most people say that in Egypt, travelers feel like a walking wallet.)

The Sphinx is smaller than you'd think, but angles make it easy to look big. It's pretty fantastic, what with it still having traces of paint on it (!), though I was more impressed with the feet, as they're much more recently uncovered than the head and show it. We also visited the areas of Saqqar - home of the step-pyramid of Zoser, a kind of prototype for the Great pyramids, and where we got to go down into an intricately-carved tomb with lots of hieroglyphics. I just stood and stared for a long time - the scratchings from tools are still there. Lastly, we ended up at Dashur, home to the first pyramid experiment, the Bent Pyramid, where the angle starts at 54* and changes to 43* when they realize they can't finish. Talk about an oops. We also went down down down into a burial chamber with no writing. All it was was a high-ceilinged chamber (well, three) and lots of very old-smelling air. Still, quite an experience to be down there.

It was a very exciting day and I can't wait to share more pictures of it!

Now you know who put the 'gyp' in Egypt!

@Dad: Funny enough, I just found out that the word gypsy comes from the shortening of Egyptian because people used to think the gypsies came from here. The verb gyp can't be shown to be derived from gypsy, however.