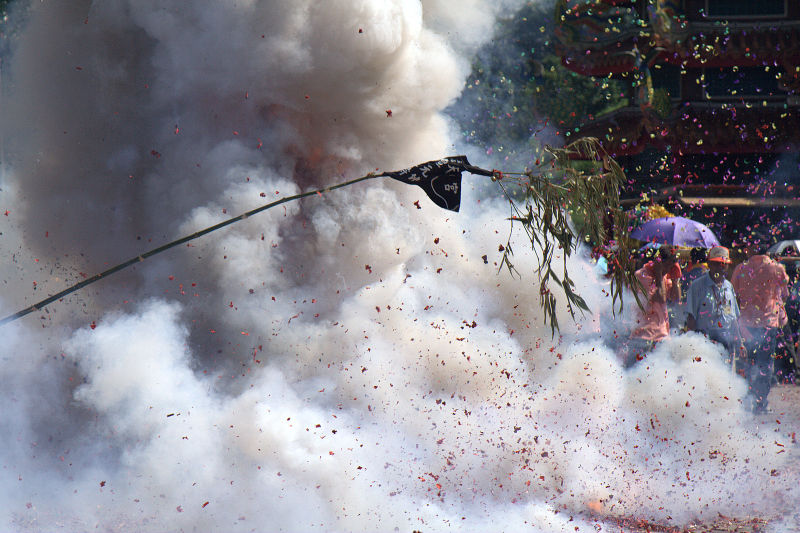 Posted by Ryan (Vancouver, Canada) on 5 October 2008 in Lifestyle & Culture.

Well, we woke up incredibly early this morning to do kung fu demos like the one we did a couple of weeks ago at a number of temples. It's a god's birthday today, so celebrations are happening everywhere. When we got to the first one (at 6:00! In the morning!), we were asked to carry flags and march around instead of kung fu. OK. People looked at us a little strange - it's not often you see foreigners in a religious procession here. Well, never, really.

After the little morning walkabout, we got on a bus and drove a couple of hours to a huge temple close to Tainan. I sat this parade out (they needed four, we were five) and took pictures as the crew advanced. Man was it a circus. Group after group entered, doing lion dances, walking on stilts, beating drums, playing instruments that sounded like bagpipes, only they just had the pipes. Most of all, there were firecrackers. These are to scare away the ghosts, I think. Let me tell you, there were no ghosts anywhere near here. I think they all fled the country, to be honest. We walked around for a while, did some of our own pictures, then headed out again.

The whole thing started again, though on a smaller scale, when we got back to Kaohsiung. By this time, we were pretty tired and just wanted to go home, but we carried flags again and even got to do our demo eventually. It was a tiring, LOUD day, but it was one of the most Taiwanese things I've ever done and I got some terrific photos and memories from it. And a great story or two to boot.

This picture is from the march into the big temple. There were long lines of firecrackers laid out on the ground and big piles every now and then. The smoke was thick and acrid even from metres away. The picture I took right after this one has a mushroom cloud from one of the giant piles taking light. There will be a gallery of the day up shortly on flickr and facebook, if you know where those are for me.