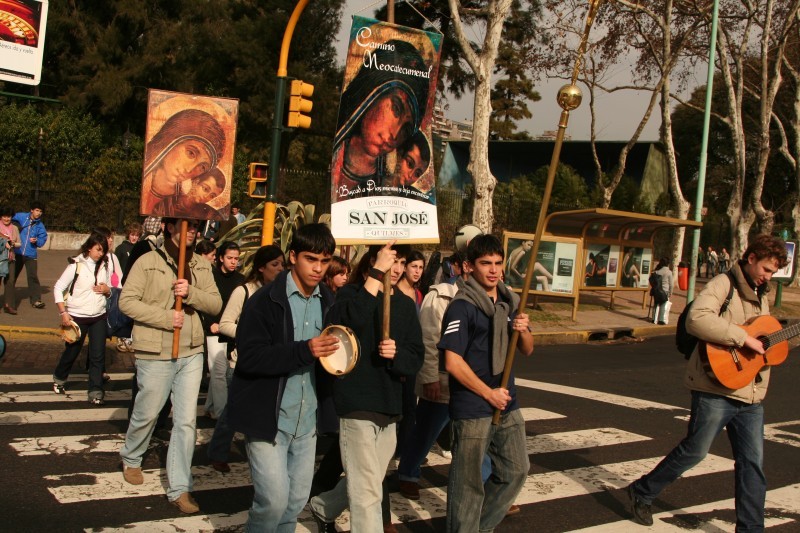 This group came out of the zoo today and marched along singing Hallelujah. This is not as uncommon as you'd think it is.

Today is also the 19th, which means the church around the corner is kookoo for churchpuffs today - the 19th of April is the Saint's Day for that particular church (St. Expeditus, patron saint of sailors, dealers, students, examinees, and those hoping for success in lawsuits!), but they celebrate every 19th.

Christine saw a story about how piranhas have eaten 40,000 cattle up in northern Argentina in the last couple of months because a river that contained piranhas overflowed its banks a while back into the fields, allowing the piranha access to the fields, where they have bred and fed on cattle.

Lastly, I went and saw a few old Three Stooges shorts at a kids' film festival today, and I have to say, the Three Stooges does not translate well. There were a couple of minor different translations or mistranslations (beer instead of schnapps, sausage instead of hamburger, and, puzzlingly, yes for no), but they also just skipped whole lines of dialogue. I can kind of understand why, it was fast, but it would be confusing for someone following along with the subtitles.

Interesting dialogue, but I really like the picture. You've caught their quiet passion.

@Viewfinder: It was kind of a run-on day. Thanks for the kind words.

a fine shot, full of youth

@Dimitrios: Thank you. They had a certain serious energy about them.