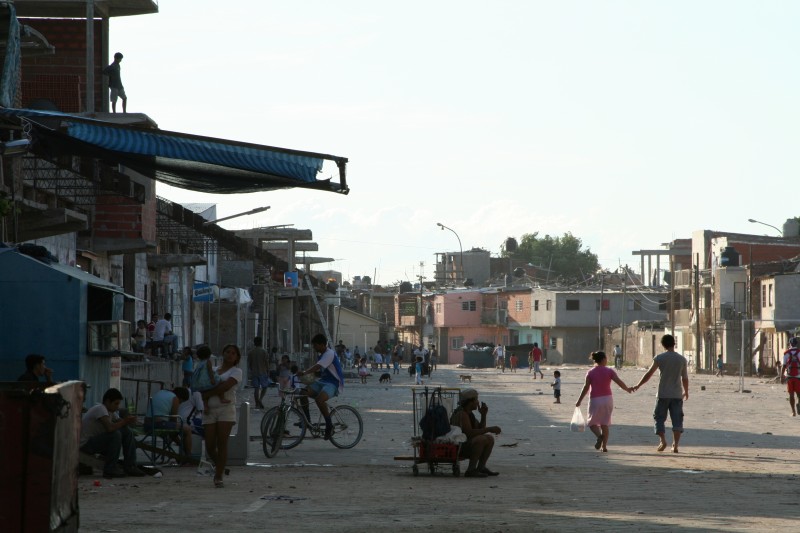 view of a villa

Villas are what the shantytowns are called down here, and this is just one of them. I received a special assignment to go and take pictures of a circus school for kids in one of these villas from a friend who was writing an article for them in the South American Explorers magazine (published photos, yay! More on that tomorrow, though). I just read that it's thought that 10% of the population of Greater Buenos Aires lives in one of the hundreds of villas found throughout the city.

Walking through, I noticed a lot of wonderful things, things you don't see as much in the rest of the city - people out chatting with each other, kids playing sports with one another in the street, cops walking around, chatting with people, food cooking on grills, and more. It was much more like the life we've seen out in the suburbs in our trips out of the city. However, I was definitely in an area experiencing poverty - the houses were mostly just bricks and mortar, one room per floor generally containing one family, generally stacked three floors per building, connected by a tightly-spiraled staircase circling up to the doors, dogs everywhere*, and lots of bars on doors and windows.

Due to the fact that many of these areas contain fairly combustible materials and have fairly thrown-together electrical systems (if you though this situation in China was bad, you should see the transformers in these places - wires hanging off of all different colours, duct tape binding them together for better or for worse), the potential for disaster always hangs over the head of the community. Just last month, one of the larger villas had a huge fire (the possibility of arson is still being investigated), leaving hundreds homeless and a few casualties. It's a hard life, and it will continue to be hard for these people to break that cycle of poverty when so many others in the country are close to it and everyone is looking out for himself.

*You know, I've wandered around a few poorer areas in the world, and there are always dogs - it's never cats. I don't know why.