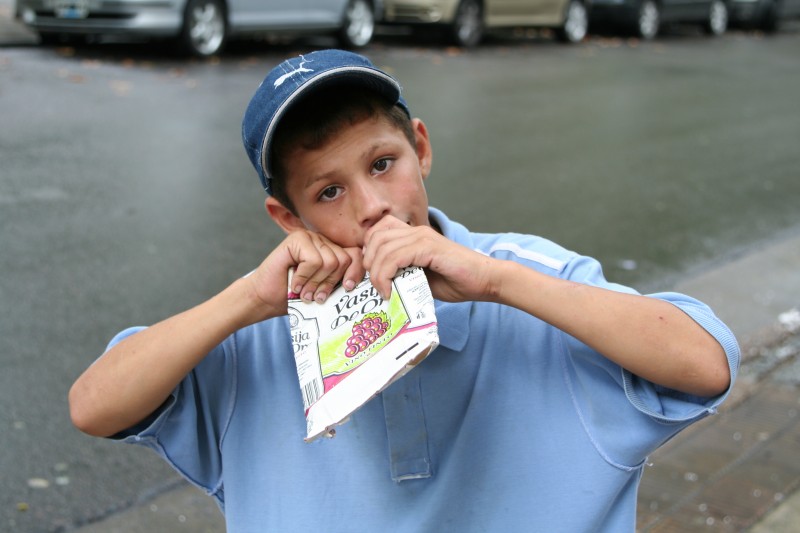 the photo that caused a bit of trouble

Posted by Ryan (Vancouver, Canada) on 26 January 2007 in People & Portrait and Portfolio.

So I'm wandering around before class, taking pictures in puddles around a church (the weather was so weird to day - it cycled from pouring rain and flooded streets to sunshine about four times throughout the day), when this boy comes up to me. He points at my camera, and I think he wants a picture. I ask him if he'd like a picture and he agrees. I take a few, he takes a huff, then I thank him and head off to my class. He follows me, asking for something, pointing at my camera. I don't recognize what he's saying (he wasn't using any word I had heard for any kind of money, and I've heard them all), and tell him so.

He snatches my sunglasses and peals off, so I put my camera away and follow him, as he wasn't running away that hard. I catch up with him half a block away and start asking for my glasses back. A homeless guy comes up and asks what the kid took (at least, I think so, I had a really hard time understanding him. For some reason, he thought I was Russian). I got my sunglasses back and a reprimand that I shouldn't take photos of the kids. I thanked him and told him the kid asked me and I asked him.

Moral: Make sure both sides are clear on the transaction. Of course, I wouldn't have followed the kid if I hadn't been in a decent neighbourhood with people around outside a church in the middle of the day, but be aware when you're taking pictures.

That said, this is a small indication of the poverty that can be pretty easily seen here daily. Argentina is still a third world nation in reality; Buenos Aires is an anomaly in the eighth-largest country in the world.

Now, THAT is an interesting account of the problem which bugs me all the time when I take photos of strangers in the street. The photo I posted today of the kids playing in a fountain was "stolen" - and once they were aware of what I was doing, they threw water at me, and not in a playful way. Fair enough. Nothing compared to what happened to you - my sympathy. But what a GREAT PHOTO!

@Sidonie: I've missed too many pictures/had too many turn out badly because I didn't ask, I just do it out of habit now (when practical). A scowl never makes for a good picture.