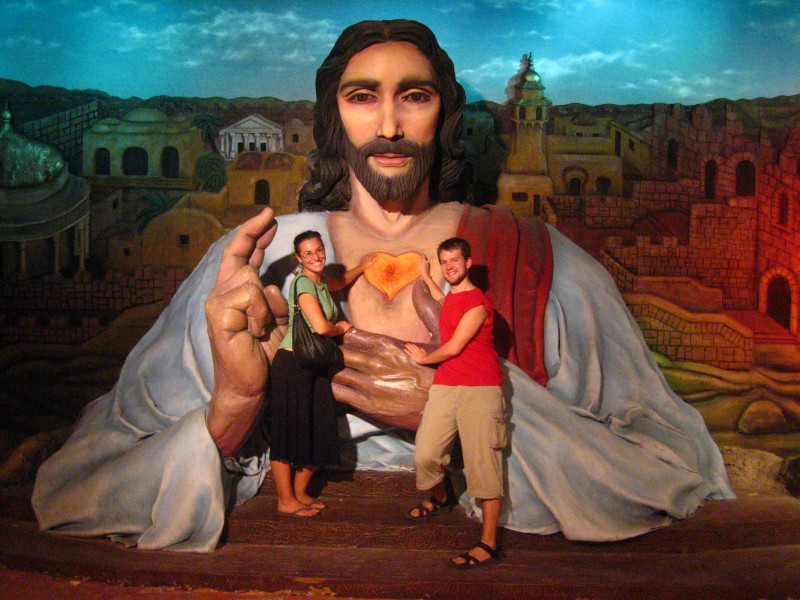 a visit to the holy land

Posted by Ryan (Vancouver, Canada) on 13 January 2007 in Abstract & Conceptual.

My friend Kendra that I met almost three years ago when I was in Australia (this is why it's great to keep in touch!) has been here visiting for the last couple of days. She's en route to do some volunteering in the middle of the country, so we tried to show her a bit of life here, packed into three days.

This included a trip to Tierra Santa, a Catholic-themed theme park. Complete with the largest animatronic nativity scene in the world, its own wailing wall, a light and sound show on the Creation, and an 11-metre-tall Jesus that resurrects every half an hour. Also, I could understand the statues of Pope John Paul II and Mother Theresa, but Gandhi and Martin Luther confused me a little.

My favourite part? The section in the program (provided in English or Spanish) talking about souvenirs: "You can't leave without taking home a souvenir made by our craftsmen inside the park...This will remind you of unique experience lived in our park." You need a ticket to get in and a cheap souvenir to leave, and you can never, ever forget what you've seen... ;-)

The park was actually pretty neat (it had a synagogue and mosque, and required you to put a yarmulke on and take your shoes off, respectively), and the statues were really well-done - I saw a couple that I could've mistaken for a person. It's apparently quite popular around Easter, which would be a sight to see.

Those hands of his are creepy, but the photo's cute.